In the News: Pine Park prepares to unveil $11 million upgrade 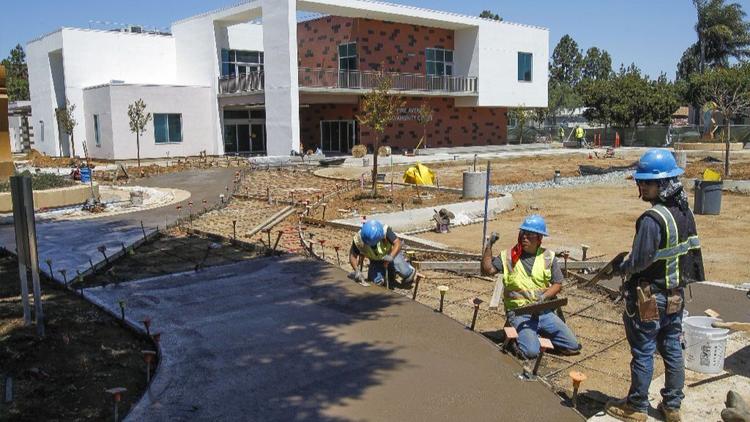 The centerpiece of the project is a two-story, 18,000-square-foot building with a multi-purpose gymnasium, meeting and activities rooms, a homework room, a computer lab, outdoor patios and more.

“It’s great for the community,” said Alissa Hubbard, who lives nearby in an apartment on Walnut Avenue. “There’s a lot of kids around here looking for stuff to do.”

Floor-to-ceiling windows on two sides of the gym at the corner of Pine Avenue and Harding Street will allow natural light inside and minimize energy use during the day, said Mike Pacheco, the city’s recreation services manager. At night, the windows will let people on the street see the lights are on inside, and serve as a beacon into the neighborhood.

“This will invite people in,” Pacheco said, and make the center more appealing to nearby residents.

Inside the gym there’s a long, low, horizontal climbing wall to challenge young children, while keeping them close to the floor for safety. The hardwood court is striped for regulation high school basketball, volleyball, badminton and pickleball, and there’s an electronic scoreboard overhead.

The interior wall opposite the street is covered with a colorful, pixilated depiction of a young family headed to the beach, and the graphic design is carried throughout the building.

Also on the ground floor is a carpeted activity room with the capacity for up to 95 people, depending on the seating, and a large lobby and reception area with polished concrete floors.

The second floor includes observation areas with glass windows overlooking the gym, a large room for teen activities and table games, a homework room with desks for about 30 people, a computer lab for 15, a kitchenette, restrooms, and an outdoor deck that overlooks the park’s interior courtyard, ball fields and play areas.

The new building is on what was formerly a parking lot at the east entrance to the Carlsbad Senior Center, and the new structure has a different look than the older building.

“The architecture is more modern,” said Kyle Lancaster, parks services manager. “The intent was not to mimic the existing center, but to create clean, angular lines that are complementary to the existing senior center.”

Outdoors, the park is getting new drought-tolerant landscaping, a plaza with tables and a shade structure, separate picnic areas, an art installation, a water feature, and a community garden with plots residents can lease to grow their own flowers, fruits and vegetables.

The community garden, where 36 of the 40 raised beds will be leased to residents, will be Carlsbad’s third. The others are at Calavera Hills Community Park on Glasgow Drive, and across Laguna Drive from City Hall and the Georgina Cole Library. There’s a waiting list for space in all three gardens.

The Pine ornamental and community gardens are at the southwest end of the park, opposite the new two-story building, on land that’s been covered with wood chips since the city bought some old homes there and demolished them years ago.

Los Angeles sculptor Jenna Didier was selected from about 100 artists who responded to the city’s request for suggestions to be the ornamental gardens’ installation.

Didier met with neighborhood residents to create her design, which consists of a 12-foot-tall set of half-dome shells of steel mesh, flowering vines, and living willow trees over a sculptured stone fountain.

The senior center at the northwestern end of the park was built in 1989, and the nearby ball fields and playground opened in 2006 on land that for many years held an elementary school serving Barrio residents.

A grand opening celebration is planned from 10 a.m. to 1 p.m. May 19, with live music, entertainment, crafts, children’s games, garden demonstrations, tours and a ribbon-cutting.

Construction is expected to begin in June on improvements at two other Carlsbad parks, Aviara and Poinsettia.

Aviara, at the corner of Poinsettia and Ambrosia lanes, will get a gathering area with a small stage, a community building with restrooms, storage space, and a room to be used by caterers. Construction there is budgeted for about $3 million.

At Poinsettia, on Hidden Valley Road, the upgrades will include a dog park, a multi-sport arena with synthetic turf and bleachers, and new playground equipment. That work is expected to cost about $4 million.