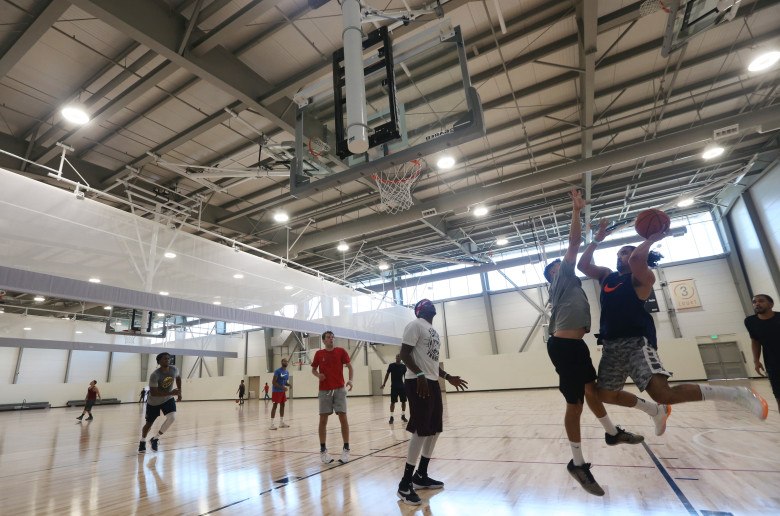 “When people are walking in right now, they’re just so excited by what we’ve provided for them,” said Jenny Hanlon, community services supervisor at the center.

The $13 million facility is an upgrade from the previous location, a retail center in the 900 block of San Bernardino Road that the city leased for the past 20 years.

“I think it’s a huge upgrade from the place we were at before,” said Fred Porchia, recreation leader with the city.  “I grew up at that place. It was time for something new and fresh.”

Oscar Bridges had been taking his 17-year-old granddaughter to the city’s former sports center.

“She basically grew up over there in that rec center, so it was sad to see them close the doors,” he said. “It was like a monument to her because she was there so many times, but when she first came here and saw all this, she goes, ‘This is the new monument.’”

When the lease was set to expire on the former facility in 2017, the city began looking for another location.

The city already owned the new center’s property and the infrastructure was already in place, making the site off Rochester a more economically feasible location, Hanlon said.

The center also joins other athletic facilities in the Epicenter Sports Complex, such as the Rancho Cucamonga Quakes minor league baseball team, softball and little league fields, and the privately-owned GOALS Soccer Center.

While the new center does not have racquetball courts, which Hanlon said were declining in popularity, the open space inside and outside offers opportunities for other activities, such as wrestling and cheerleading.

All three indoor courts can also be used at the same time, which was not possible at the former location, she said.

“This has ample space for us to use all three courts at one time and have a place for parents to watch their kids play,” Hanlon said.

The window seats outside the indoor courts have also proven popular for parents who want to read while their kids play, or for those enjoying a bite to eat. Food and drink is not allowed in the indoor courts.

“We had drop-in players order a pizza and had it delivered here,” Hanlon said. “They sat at the viewing area eating pizza until they were done, so they could go back in and play.”

For more information on the city’s programs, visit rcpark.com.