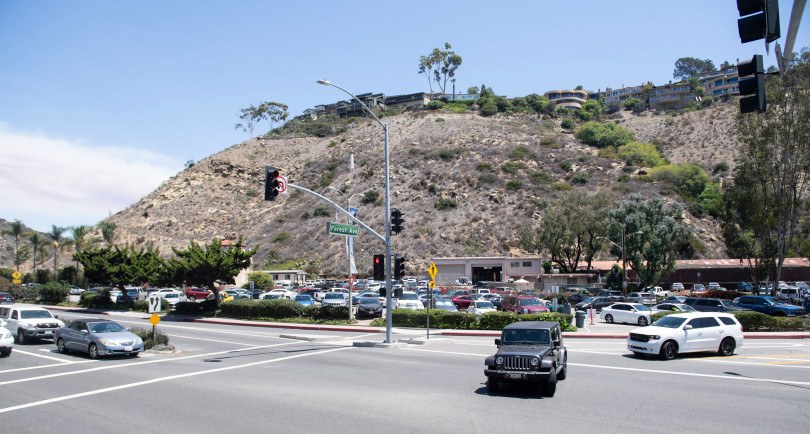 This city’s welcome mat is frayed at the edges.

More than six million visitors pour into town each year, many on Laguna Canyon Road. They drive by city parking and storage areas and a decaying red-beige sewer digester before they reach art galleries, shops and beaches.

Previous officials have haggled for decades over how to make the city’s entrance more picturesque and inviting. Finally, a solution appears to be right around the corner.

The Laguna Beach City Council on Tuesday, Aug. 7, approved a contract for a $10.8 million project to beautify what is locally known as the Village Entrance — an area near the intersection of Broadway Street and Forest Avenue. On Wednesday, city officials said the revised project budget is $11.1 million and includes final design and all anticipated construction-related costs.

The project, which has increased in cost more than 30 percent in seven months, includes landscaping and a pedestrian and bicycle path. Small holes will be patched on the sewer digester building, and the exterior will be painted.

Plans also call for a new metal building for city lifeguard equipment. The council also agreed to pay for decorative fencing to cordon off the channel area now bordered by a chain link fence.

Phased construction is scheduled to begin Sept. 4., with a break during the summer of 2019. Completion is targeted prior to summer 2020. The project is designed by Griffin Structures and Michael Baker International.

The area has gone through a series of beautification proposals — including a $43 million plan scrapped in 2013 that included a four-story, 506-space parking structure. That controversial plan pitted Chamber of Commerce members against dozens of residents.

A pared-down plan moved forward in December, when the City Council authorized staff to create final designs and permits and opened bidding for the project, which was then estimated at $8.4 million — an increase from the $6.9 million earmarked for the project. In January, the council gave its final OK with a few design changes.

On Tuesday, the council, in a 4-1 vote — with Councilman Steve Dicterow opposing — selected CS Legacy, the lowest of three bidders. The Chino-based contractor has worked on similarly sized projects including Crown Valley Park in Laguna Niguel, Chittick Field in Long Beach and the city’s South Laguna streetscape in 2009.

“I think we got three responsive bids and the low bid is a good bid,” said Councilman Bob Whalen. “I’d like to see adding a decorative fence and adding a retaining wall for four additional parking spaces. I’m not a big fan of the digester but I’ve been convinced it’s not going away. It’s a separate project that will have to be funded in the future.”

The fate of the sewer digester — a 1930s-era building built with Public Works Administration funds and seen by many as a Laguna landmark — was the focus among many residents who spoke at Tuesday’s meeting. Several referred to past council discussions including plans to fully restore the outside. Others said they recalled agreement for a full historic restoration, including work on the interior.

Anne Frank, who serves on the city’s Historical Preservation Committee, reminded the council that the building is noted by historians.

“The community rallied in 1989 to prevent demolishing it,” she said. “To polish and repair the digester pays homage to our history. It’s a wonderful site for public restrooms.”

Ann Christoph, a landscape architect, complimented the council on its progress.

“This is a wonderful day when you think of where we’ve been with this,” she said. “We’re coming back with a modest, affordable plan.”

Christoph suggested cost savings could be found in reduced landscaping. But, she also pushed for restoration of the digester, suggesting the city use plans designed in 2017 by local architect Morris Skendarian.

Others questioned the project’s cost. City officials said Tuesday that the price increase came from such factors as a busy construction market, increases in trade prices driven by a decline in workers and stricter immigration policies, current and looming tariffs and a hike in the price of crude oil.

“What about a line-by-line breakdown of the costs? Why is that not available to the community,” asked resident Jennifer Zeitner. “A lot of money is made on change orders. It’s outrageous that the city has a contract for a full-time inspector of $500,000. Maybe that should be someone on city staff?”

“I’m utterly shocked we’re at a precipice of a $10.8 million project when I think this thing started life as a couple of million dollar effort,” he said….  “We have to analyze what we have. We clearly can’t afford this as a city. In November, you’re asking your residents to tax themselves….We have absolutely no reserve — where does this end?’

It was the rising cost, in part, that prompted Dicterow — who has been on the dais through years of this project’s evolution — to vote against finalizing the contract to move forward.

“For me a 30 percent increase in barely seven months is the straw that broke the camel’s back,” he said. “I would reject the bid and not move forward at this time. I feel we’re spreading ourselves too thin. Property values are high — it’s not always going to be like this. Take a step back and look at the alternatives … maybe a public-private partnership?”