In the News: ANATOMY OF A SUCCESSFUL PUBLIC PRIVATE PARTNERSHIP 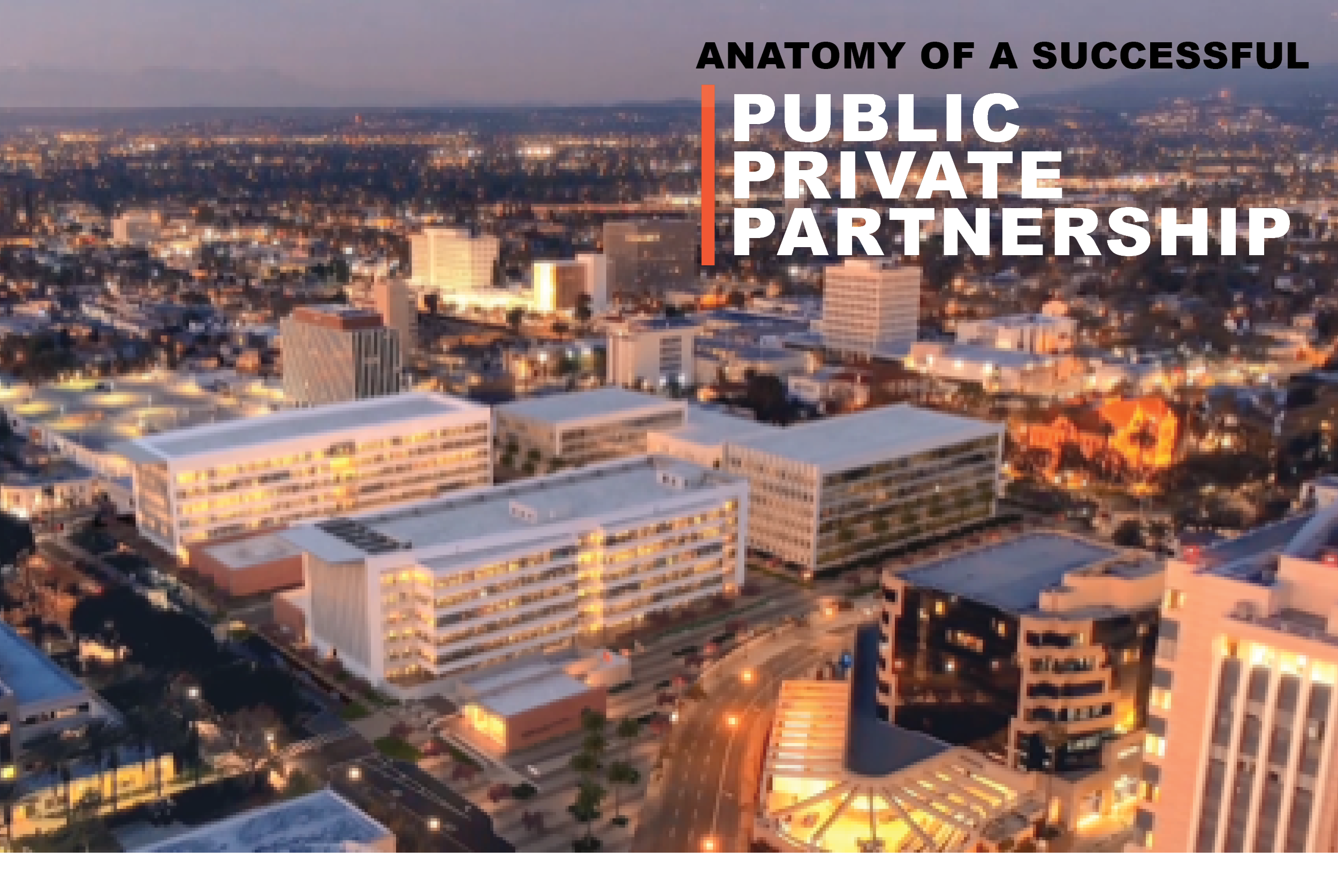 The redevelopment of Orange County’s Civic Center provides a road map on how to make a public-private partnership (P3) work.

For 30 years, a three-story, 1950s-era building sat vacant in the heart of the County of Orange’s Civic Center in downtown Santa Ana, California. As the County slowly recovered from a much-publicized bankruptcy in the 1990s, Building 16, the deteriorating concrete structure, was a symbol of the County’s aging and inefficient office infrastructure.

Today, construction is scheduled for a late 2019 opening of a new $180 million, 250,000-square-foot, six-story office complex with below-grade parking on the site, the first phase of a 20-year master plan to reposition every aspect of the County of Orange’s downtown real estate and approach to customer service.

The new building “ushers in the beginning of a new era at the County of Orange,” First District Supervisor Andrew Do said at the topping off ceremony. “We are creating a more efficient and ecological work space while rethinking what accessing County services should look like.”

At the heart of the project is a public-private partnership (P3) which is one of the largest P3s under development on the West Coast. With Griffin Structures as lead developer—and LPA as the design partner and Swinerton Builders as the general contractor — the partnership with the County covers 10 County-owned buildings, 4,600 employees and more than 1.6 million square feet of space, including a wide array of public areas.

Building 16—now known as County Administration South (CAS)—will include the County Service Center, a one-stop counter for County residents to engage with all 13 county departments, immediately reshaping how the County serves its citizens. It also reorganizes the offices for many departments, in a LEED Silver building designed to reduce fossil fuel use by 70 percent. The next phases will create new public plazas, modernize the office environments and cut the County’s operating costs for decades.

“These buildings will take this County out another 80 to 100 years,” says Griffin Structures CEO Roger Torriero. “The County realized that this is an excellent opportunity to reconsider how they do their business today and how they want to do their business in the future.”

A ‘Deep Dive’
The story of the County of Orange’s redevelopment provides a road map on how to implement a successful P3, taking a holistic, big-picture approach to a public project. The P3 changed the game for the civic center, creating a process where the County, developer, designer and builder were working through issues as a collective team from the beginning of the process.

“You are making much more intelligent decisions based on much better criteria, very early in the game and that’s when real money is saved,” says LPA President Dan Heinfeld.

In California, P3s are growing in popularity. After the state dissolved redevelopment agencies in 2011, risk adverse communities were pushed to explore better ways to deliver projects. The Civic Center project is financed using the County’s credit rating and long-term lease revenue to back tax-exempt bonds. After paying off the 30-year bonds, the County will own the facilities.

The County’s planning and design process started with a comprehensive Facilities Strategic Plan, conducted and authored by Griffin and LPA, to evaluate every aspect of the County’s downtown operations, including the condition of the buildings, department operations, space utilization and energy efficiency. The analysis covered more than 22 separate facilities occupied by the County around the Civic Center—as well as the ramifications of doing nothing.

“We did a deep dive with the County on their own Civic Center properties,” says LPA Principal Karen Thomas.

The study found the average age of many of the County’s owned buildings was close to 66 years. Assets were also being used inefficiently; the County was paying about $26 million a year in occupancy costs. The office space allocation was about 375 square feet per person, exceeding the County’s goal by 100 square feet.

The approved plan split the 20-year project into four phases, allowing the County flexibility during the implementation process. Ultimately, four new administrative and operational “neighborhoods” will be created, grouping related County functions within the reimagined and rebuilt Civic Center. The County will also vacate leased space, freeing revenue for the P3 financing, while also cutting energy consumption and operating costs across their expansive real estate portfolio.

A Guaranteed Maximum Price
As a project delivery system, the P3 worked fundamentally different than a design-build, providing distinct advantages to the County. The development agreement includes a guaranteed total project maximum price for the County, shifting risk to the developer to make budget and to deliver on time. No rent is due until the buildings are occupied. The project is competitively bid at prevailing wage, an “open book” subject to County audit—with all savings going back to the County.

The guaranteed maximum price also changes the tenor of the design process. From the start, the developer, architect, builder and County worked closely on every concept and detail, before setting the final guaranteed maximum price. “We have to do a very clear set of design development drawings and the contractor has to do a much better job of estimating, because at that point we are making decisions that are long lasting,” Heinfeld says.

Integration and communication between the groups were essential for the Orange County plan, all parties agree. Griffin, Swinerton and LPA had already worked together on a number of complicated projects giving each team member an understanding of their role in a P3 process. Weekly meetings between the groups focused on issues and challenges as they arose, with the developer, designer and the builder discussing everything with the County, from structural systems to seal packages. Given the flexibility inherent in the P3 process, the team was able to engage early in the process with key trade contractors, who provided input at every step of the BIM process.

Communication “squeezes out conflicts; it eliminates surprises,” says LPA Principal and Studio Director James Wirick. In the P3, the realities of concepts can be tested early, “instead of having it blown up at bid time when they find that it is too expensive and can’t be built,” Wirick says.

The County created an ad hoc committee to meet directly and regularly with the development team, streamlining discussions and making it easier to provide quick feedback and direction. “They were able to see the project early on,” Wirick says. “It’s a very linear way of getting decisions made in a bureaucratic environment.”

Another key advantage to the P3 is that it gave the County the ability to effectively manage the entire process with a single staff member. In turn, the developer provided the County with a single point of contact, with responsibility and accountability, which facilitated and streamlined the day-to-day project management for all involved.

Throughout the discussions, LPA was able to call on its integrated team for rapid answers. Engineers were on hand to discuss seismic issues. Furniture designers negotiated front-end costs. When a stormwater management issue arose, LPA’s civil engineers “left the conference room and came back 30 minutes later with a drawing that reflected the revisions needed to stay within budget,” Heinfeld recalls. “There was real time input, real time development.”

A Radically Progressive Approach
From the start, the P3 created a holistic framework for the project, looking beyond the construction of the buildings to how they will be used. In many ways, the project took on the tenor of a corporate project, Thomas says. Workplace design became an integral part of the planning, as the County looked for efficiencies and ways to develop the type of healthy work environments craved by modern employees.

The process was “radically different” than a typical civic office development, Thomas says. “Creating an office building with the integration of the whole team allowed us to address real costs,” she says. “That couldn’t have happened if we were designing and putting it out to bid and then figuring out how to finance it.”

The new buildings will take County workers out of dark, aging buildings into spaces bathed with natural light. Floor plans are designed for collaboration and independent work, while cutting per-employee square footage from 375 feet to 260 feet per person.

The redevelopment also introduces a new era of energy efficiency for the County. Building 16 is designed to reduce fossil fuel use by 70 percent, meeting the 2030 Challenge, without any renewable energy offsets. The savings will be achieved through a variety of passive design systems, such as proper building orientations, solar shading, daylight harvesting and energy-efficient HVAC systems.

All new Civic Center buildings will connect to the County’s currently underutilized central utility facility, which was upgraded in 2017. The utility plant provides power, steam and chilled water at substantially below-market rates, but many of the current buildings in the Civic Center lacked the connectivity and the infrastructure to access the facility. The redevelopment plan connects more buildings directly into the central utility facility, maximizing the County’s long-term investment return on the facility.

Throughout the process, the P3 framework allowed for long-term forecasting and analysis of each element. “It allows everyone to plan, so there are no surprises,” Wirick says. “It’s a long-term, methodical, non-crisis mode of project delivery.”

The Next Step
Construction is expected to begin in October 2019, on the next phase of the Civic Center Facilities Strategic Plan project, including a $200 million, six-story “sister” building to the new County Administration South (CAS). County Administration North (CAN) will include a new, state-of-the-art public meeting room for the Board of Supervisors and new and flexible offices for the Supervisors and staff. This next phase also includes the demolition of three aging buildings and the relocation of several County departments to further reinforce the “neighborhood” concept.

The County estimates “the cost savings in CAN alone, through the efficiency of the design and the work stations, the lighting and the [heating, ventilation, and air conditioning],” will total more than $160 million in 30 years, stated Supervisor Lisa Bartlett.

The demolition will also clear land and create future expansion options or opportunities for revenue-generating private sector development for the County, as it enters the next phases of the redevelopment. Fifty percent of the Civic Center block will revert to open space, when the five aging buildings are consolidated into two. The connection between the two new sister buildings will create a significant public plaza, a “pocket park” and a new secured gateway to the County’s administrative offices.

Throughout the process, the focus was on meeting the long-term goals of the County of Orange and keeping a tight rein on taxpayer dollars, Torriero says. “The buildings will be highly utilitarian, highly functional and give the County a lot of flexibility over time.”

“Throughout the process, the focus was on meeting the long-term goals of the County of Orange and keeping a tight rein on taxpayer dollars. The buildings will be highly utilitarian, highly functional and give the County a lot of flexibility over time.”