In the News: Joining a new construction trend, freight containers to be re-purposed for homeless shelter in Buena Park 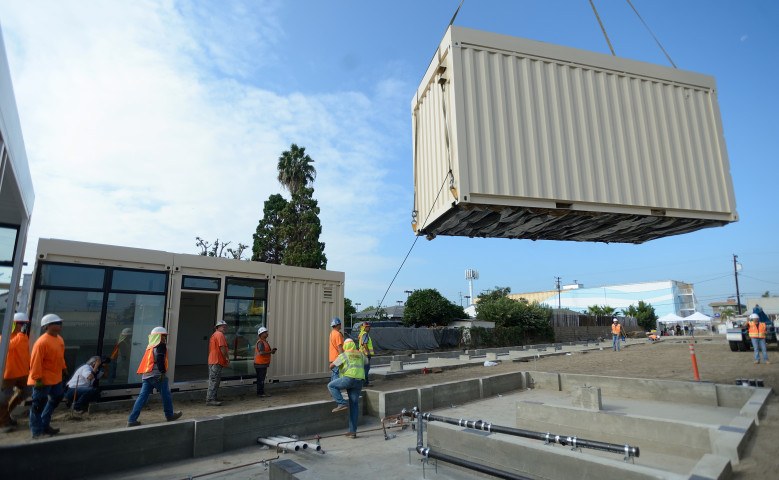 The city soon will join the cutting-edge trend of turning shipping containers into homes, businesses, libraries and classrooms – tapping Crate Modular, which specializes in container conversions, to build a facility for about 150 people several blocks north of Knott’s Berry Farm. Irvine-based Griffin Structures will manage the project.

Crate Modular built Potter’s Lane in Midway City in 2017 – the first example in the nation of a multi-unit permanent housing complex fashioned from cargo containers.

Expected to be completed by the end of the year, the Buena Park shelter will serve 13 north Orange County cities – with Anaheim and Placentia also providing shelters for the consortium.

“Warehouses in aging industrial parks generally have old wiring and old pipes,” Alamo said. “They require a lot of renovation. Shipping containers are a very economical product that can be erected within a short time frame.”

And time is of the essence.

Overseeing a lawsuit filed on behalf of homeless people, U.S. District Judge David O. Carter ordered the county and local cities to start providing housing for 60 percent of their total homeless population based on a 2017 count. For Buena Park, the homeless total was 98.

Additionally, because of a ruling last year by the U.S. 9th Circuit Court of Appeals, cities cannot enforce anti-encampment ordinances without offering homeless people an alternative.

Buena Park – like other cities, including Huntington Beach and Tustin – got off to a bumpy start, ditching its original choice for a shelter location. Last October, the city bought a vacant furniture store on Lincoln Avenue for $3.6 million, but residents complained it was too near an elementary school.

On April 9, City Council members approved the revised plan of using a 2-acre lot the city already owns. The property on Lincoln now will be used for affordable housing, officials said.

Alamo said the shelter’s blueprint has not yet been drawn, but it likely will have two stories and house about 150 people.

“The beauty of shipping containers is that you don’t have to wait for the tractors to leave before you start building – you can simultaneously grade the land and construct the framework,” Alamo said.

The containers arrive with plumbing and electrical wiring ready to be, essentially, plugged in, Alamo said: “It’s literally like putting together Legos.”

Unlike Potter’s Lane, where containers make up individual units, Buena Park’s shelter will have an open-floor plan that allows a group of people to reside in one area, said Amanda Gattenby, president of development for Crate Modular. The company has created similar structures around California, including at Oak Park High School near Thousand Oaks.

Loaded with freight, each container can weigh more than 60,000 pounds – and must be strong enough for several equally heavy containers to be stacked on top of it.

The company only uses containers that have never held toxic materials, Gattenby said.

Crate Modular purchases containers that sit idle at the ports of Los Angeles and Long Beach, she said: “China would rather build new containers than pay the cost of shipping them back.”

In an alliance called the “North Service Planning Area,” participating cities will contribute–at varying levels–$1.2 million toward building the Buena Park and Placentia shelters. A state grant will pick up the bulk of the cost at 10 times that amount.

Additionally, operating costs are estimated at about $3 million a year, 90 percent of which will be funded by the county and state.

Buena Park City Manager James Vanderpool said that before his recent tour of Crate Modular, he was “very unfamiliar” with container-based construction.

“I had my doubts,” Vanderpool said. “I wanted the best possible solution for our homeless neighbors. But then I saw first-hand how the containers are custom-modified, completely outfitted with infrastructure, durable and livable. Now I’m a believer.”