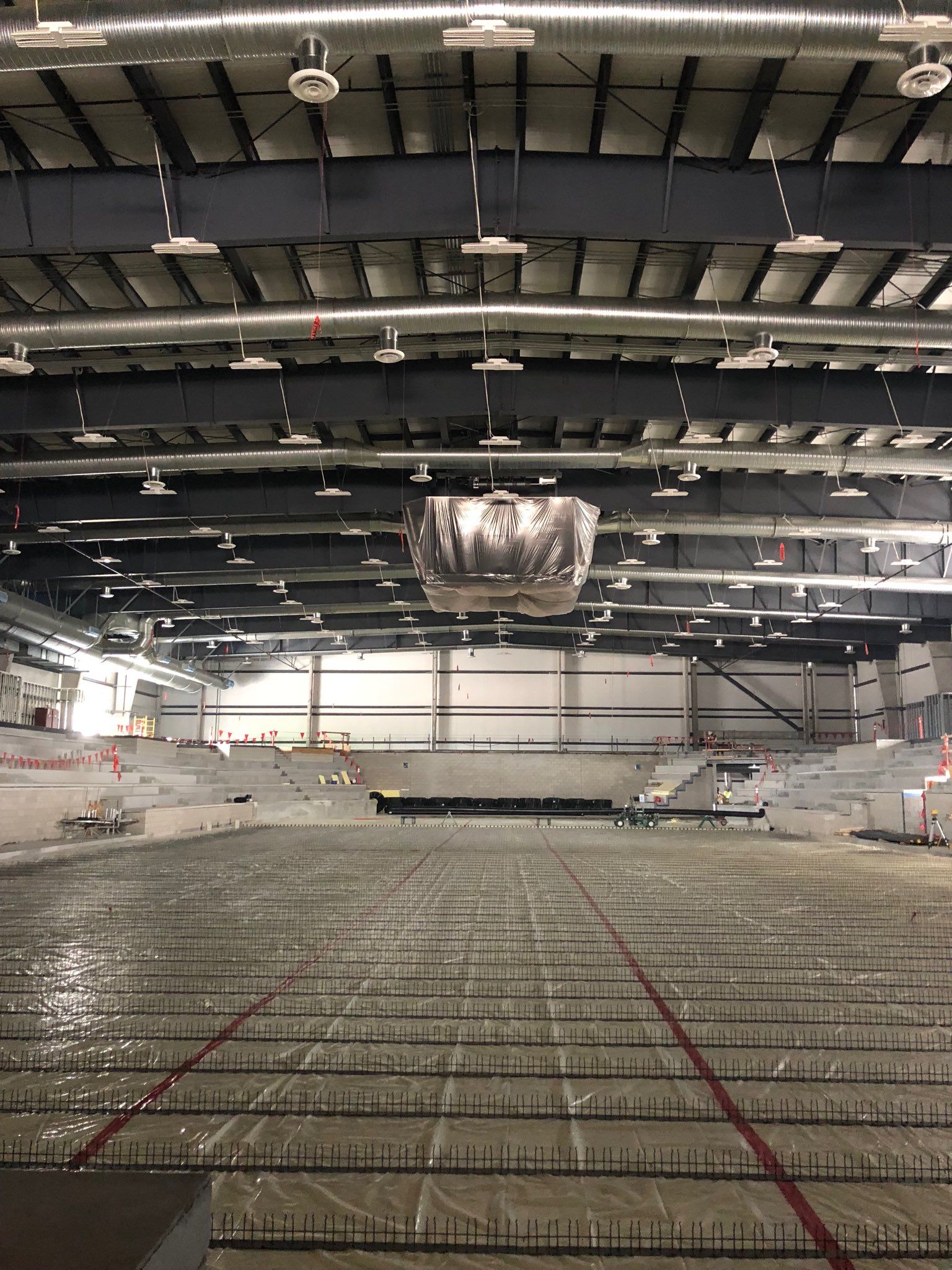 The sounds of construction echoed through the Ducks’ new practice facility Thursday at the Great Park. Workers assembled the floor-to-ceiling windows along the eastern side of the building. Others drove forklifts here and there. Still others worked on door frames and aluminum duct work.

Sometime in January, the Ducks are expected to hold their first practice in the new $104-million building, which is comprised of four rinks, including a 2,500-seat arena. It will be home not only to the Ducks, but to youth hockey programs, and will serve as a U.S. Figure Skating facility. Olympians such as Nathan Chen and Ashley Wagner are expected to train at the Great Park.

A full-service restaurant, a team store, a pro shop plus training facilities also will be housed in the state-of-the-art building, the largest in California at 280,000 square feet. Three of the rinks will be standard NHL-sized at 200 feet by 75. The fourth will be an Olympic-sized rink at 200 feet by 100.

“We’re hoping it will be one of the best in the United States,” said Art Trottier, vice president of The Rinks, the Ducks’ group of nine facilities stretching from Lakewood to Anaheim and from Corona to Poway. “We looked at the new facilities in Pittsburgh. We looked at the one in San Jose.”

Trottier dreamed for many years of building a facility that was an upgrade on Anaheim Ice, the Frank Gehry-designed practice home of the Ducks since 1994-95. The Ducks quickly outgrew the two-rink building and plans accelerated when Henry and Susan Samueli bought the team in 2005.

“This was always on their minds, since they purchased the team,” Trottier said of the Samuelis. “There was always a goal of building our own complex. This is the first new construction (in Orange County) since Anaheim Ice.”

The Great Park, on the site of the former Marine Corps Air Station El Toro, already has facilities for soccer, tennis and volleyball on part of its 1,300-acre plot of land near the junction of I-5 and I-405, at the eastern edge of Irvine.

The Ducks’ new facility, privately financed through a foundation run by the Samuelis, also will host curling, short track speed skating and sled hockey in addition to hockey and figure skating. There are plans to host badminton, basketball and volleyball events, too.

The primary focus will be on hockey and figure skating. Demand for ice time has been great across The Rinks’ network, according to Trottier. The new facility will ease some of the burden shared by rinks in Orange, Los Angeles, Riverside and San Diego counties.

“This is a great investment for the community, for the city of Irvine,” he said.

It also gives the Ducks the ability to spread their wings in ways they couldn’t in their previous home, or at Honda Center, where they have practiced more often than not since Randy Carlyle became their coach in the first of his two stints in 2005-06. The weight and locker rooms will be bigger and better, for example.

“You can do anything here with this space.”